Bay Area Teen Takes on the 25 Hours of Thunderhill

“You drive like a girl!” is often a saying that we use to belittle our buddies who might be lesser drivers than ourselves. However, if that girl happens to be 17- year-old, Bay Area resident Natasha Balogh, that might not be such a bad thing. Natasha drove in the 2015 25 Hours of Thunderhill with Kontrolle Engineering.

Braving the elements, a nonfunctioning defroster, and her first laps in the dark, Natasha and the team brought their Spec E46 to a fourth place finish in E1. One of only a few females at this year’s 25 Hour, and maybe even the youngest driver in the race, Natasha is quickly becoming a seasoned veteran behind the wheel.

Around the time she started driving a car on the street — not that long ago — her parents enrolled her in one of the NASA Teen Car Control clinics to ensure that she would be safe on the road. Natasha has a hearing disability and her parents wanted to make sure she was safe behind the wheel of a car because she could permanently lose her hearing in the event of an accident. At the clinic, her aptitude for driving caught the attention of some of the instructors and they suggested she look at driving on track a little closer. She started working with a driving coach in March 2013 and got her NASA Competition license in a Spec E30 in May the same year. Working on race craft and getting more seat time in Spec E30 through 2014 and half of 2015, Natasha moved into Spec E46 halfway through 2015. The Spec E46 class is new, and it attracted Natasha from the beginning.

“I love racing Spec E46 because with the increase in power, steering directness, and brake efficiency, it has taught me the skills necessary for driving faster cars,” Balogh said. “But what makes it a great learning car is how forgiving it is once you’ve gone beyond the limit of adhesion.”

Asked about her experience at Thunderhill this year, Natasha said, “Driving in the 25 Hour was monumental. The camaraderie, conditions, and opportunity for growth came together in one single event to mark the beginning of a new chapter in my life: the chapter of recognized potential. The 25 Hour was the breakthrough necessary to confirming my life goal: pursue racing professionally.”

With an event like the 25 Hour already under her belt, that dream may one day become reality. — Austin Cabot 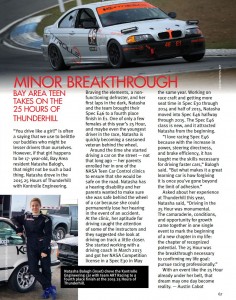