Spec E46 is now officially a NASA-sanctioned class for 2015. Competitors now will be eligible to compete in the Spec E46 class in all regions.

Designed with BMW enthusiasts in mind, Spec E46 provides a newer platform from which to start, focusing on affordability and still maximizing fun per dollar. With more than 50 Spec E46 cars already built or underway, NASA expects a great turnout in Spec E46 fields in 2015 and beyond.

“We are thrilled to see Spec E46 taking off as quickly as it is, and are looking forward to many years of competitive spec racing,” Tower said. “We’ve worked with racers, shops, and vendors to develop a rule set utilizing components that yield a fun, fast, durable, and economical racing platform. Tightly regulated engines and a sealed spec ECU tune keep horsepower variance to a minimum, while high-quality suspension parts and driveline components ensure that all of that power is put to good use. With donor cars available starting under $2,500, it opens the door to close, exciting racing for beginning and experienced drivers alike.”

Tower began racing with NASA Spec E30 in 2010 in the highly competitive Mid-Atlantic and Southeast regions. He is an accomplished and seasoned racer with a passion for the new class. He lives with his wonderfully supportive wife and two dogs in Raleigh, N.C., where he works as a Linux systems administrator.

With the Assistant National Series Director Evan Levine also having contributed to the conception of the series, Spec E46 should have all the ingredients needed to flourish. With the passionate and motivated leaders we have in Jason and Evan, the series is perfectly positioned to realize its full potential. NASA Divisional Director Will Faules believes there is a lot to be gained from introducing this new series to all NASA regions.

“As a former SpecE30 racer myself, I’m glad to see the next step in spec racing, with the E30 chassis becoming harder and harder to find as cheap as they once were,” Faules said. “Having an affordable, fast, fun, reliable car is what this series is all about and I’m confident it will prove to be a great class for years to come.” 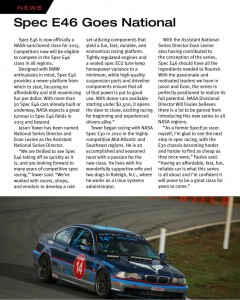